Prolific Pittsburgh rapper Wiz Khalifa comes to Xfinity Theatre on Saturday 13th July 2019 on his wittily-titled Decent Exposure Tour! Fans can expect brand new tunes from the hip hop star, who dropped his latest mixtape, Fly Times Vol. 1: The Good Fly Young, on 4/20! Joining him, with one of the dopest support line-up of the summer, will be French Montana, Playboi Carti, Moneybagg Yo, Chevy Woods, and DJ Drama! 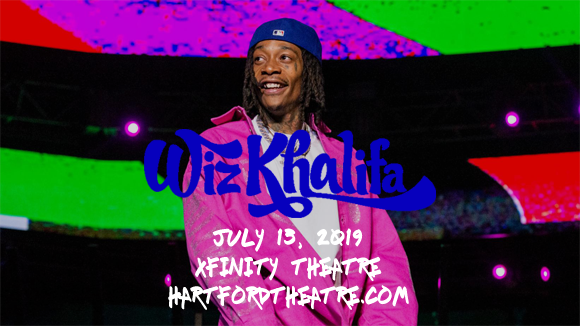 American rapper and actor Wiz Khalifa has established himself as a prominent voice in mainstream hip hop since first making waves in the scene with the 2005 mixtape Prince of the City: Welcome to Pistolvania. Khalifa signed with Warner Bros. Records in 2007 on the strength of his debut album Show and Prove (2006), and in 2009 he had his first hit with the track "Say Yeah", from the album Deal or No Deal, which reached number 25 on the Billboard Rhythmic Top 40 music chart and number 20 on Billboard's Hot Rap Tracks. Two years later, his popularity was cememnted with the release of "Black and Yellow", his Atlantic Records debut from the album Rolling Papers (2011), which peaked at number one on the Billboard Hot 100. Khalifa's second number one hit came in 2015 with the track "See You Again" ft Charlie Puth (a tribute for actor Paul Walker from the soundtrack of the film Furious 7), which charted at the top position on the Billboard Hot 100 for 12 non-consecutive weeks. His mixtape Fly Times, Vol. 1: The Good Fly Young drops this year.