Chrat-topping, award-winning country singer Thomas Rhett has come a long way since his debt album was released in 2013 – in less than a decade the 29-year-old has become one of the hottest names in the genre, with a huge fanbase to boot! This summer, Rhett is back on the road again and headed to Xfinity Theatre on Saturday 22nd August 2020 for a night of feel-good country songs from his incredible 2019 album Center Point Road! Not only will he be bringing fans a full, high-octane headline set, but he'll be joined by a special guest support line-up of fellow country singers Cole Swindell and Hardy! 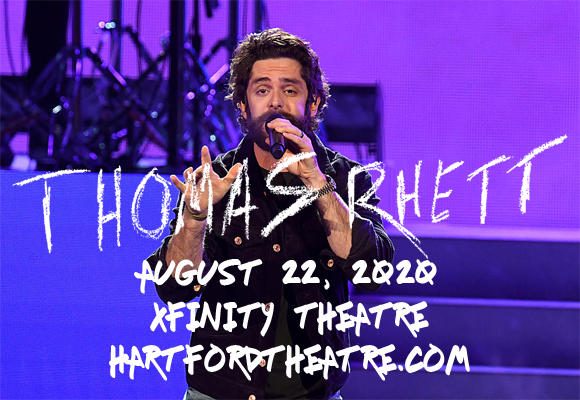 With a love for country music that began early in life, thanks to his country singer father Rhett Aikins, Thomas Rhett began his career in 2010 as a Nashville songwriter. On the strength of his co-write for Jason Aldean's song "I Ain't Ready to Quit" from the album My Kinda Party, he was signed to Valory Music (an imprint of Big Machine Records) the following year, and released his debut single "Something to Do with My Hands" in 2012. The single was an instant hit on the the Billboard Hot Country Songs Chart, along with his next two singles. In 2013, he released his debut album, It Goes Like This, which charted in the top ten on both the Billboard 200 and the Top Current Albums charts. Rhett's fourth, and most recent album, Center Point Road, was released in 2019 and received a nomination for "Best Country Album" at the 62nd annual Grammy Awards in 2020.