Award-winning, platinum-selling pop-rock outfit Maroon 5 embark on an extensive world tour this summer, which is coming to Xfinity Theatre on Wednesday 9th September 2020! The chart-topping seven piece will be serving up an energetic and larger-than-life show of wall-to-wall hits, as well as tunes from their eagerly-awaited seventh studio album! Joining them in support will be "All About That Bass" singer Meghan Trainor and soul crooner Leon Bridges! 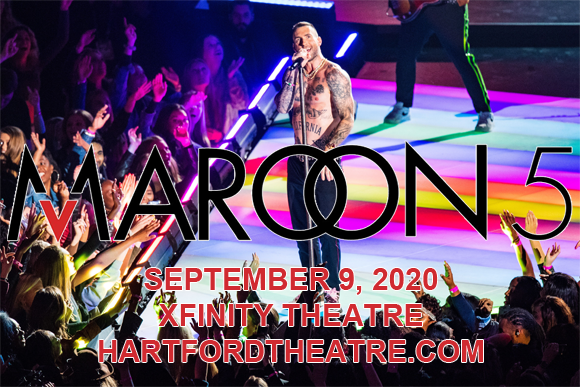 One of the world's best-selling bands, Maroon 5 was founded by high school friends Adam Levine, Jesse Carmichael, Mickey Madden and Ryan Dusick in Los Angeles, California in 1994, and was originally known as Kara's Flowers. After Kara's Flowers self-released their 1995 album We Like Digging?, they were signed to Reprise Records, with whom they released the album The Fourth World in 1997. In 2001, having left Reprise, the band became Maroon 5 and signed with Octane Records, releasing their debut album, Songs About Jane, the following year. Songs About Jane was a top ten hit on the Billboard 200 and was eventually certified quadruple-platinum thanks to the success of its five hit singles, which include "Harder to Breathe", "This Love" and "She Will Be Loved". Since then, the group has become one of the world's best-selling bands and has launched five more platinum and multi-platinum-selling albums, which have all charted in the top two of the Billboard 200.