Lady Antebellum haven't headlined a solo tour since 2017, and now the country trio are coming to Xfinity Theatre on Sunday 14th June 2020 on their Ocean 2020 Tour! Of course, they haven't been resting on their laurels, with a Las Vegas residency in 2019, and a co-headliner with Darius Rucker the year before, and this year sees new music from the Grammy-winners with their long-awaited album, Ocean! The multi-platinum-selling band won't be on their own for the night – they'll be sharing the stage with support acts Jake Owen & Maddie and Tae! 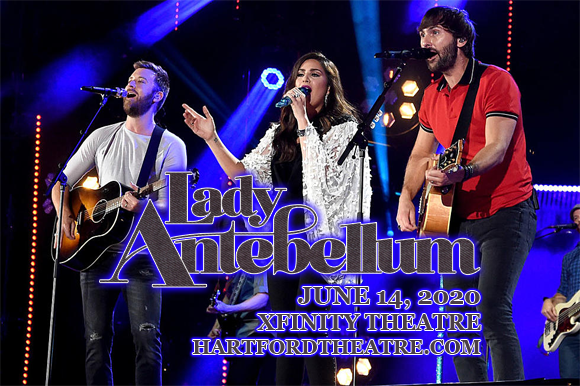 With their soaring, pop-tinged hooks and breathtakingly beautiful harmonies, country music trio Lady Antebellum have been one of country's most popular acts for nearly 15 years. Bursting onto the scene in 2007, a year after their formation, when they featured on Jim Brickman's hit “Never Alone,” the group made its debut with a self-titled album the following year. The album proved to be hugely popular, debuting at number four on the Billboard Hot 100 and at number one on the Billboard Top Country Albums chart, and was the first of three consecutive albums rated platinum or higher for the band. They have since released eight studio albums, and have charted 16 singles on the Hot Country Songs and Country Airplay charts, including nine number ones. They have also sold over 12.5 million digital singles and 10 million albums in the US alone, and have won 51 awards throughout the course of their career, including seven Grammy Awards. Ocean is their most recent album, released in 2019.