One of the most iconic hard rock bands of all time, Kiss, are hanging up their platform boots on the End of the Road Farewell Tour! The group, who have enjoyed over four decades in the limelight in an immensely successful career, comes to Xfinity Theatre on Saturday, May 14th 2022!(rescheduled from 2021)

“We can’t be running around for that much longer in 40 pounds of gear,” Paul Stanley recently told Rolling Stone of the farewell tour. “There’s nothing maudlin about it. It’s a celebration with our fans around the world. We wanted to raise the bar again as to what a band can do live. That’s really what we’ve always done: we’ve always wanted to be the band we never saw. There are a lot of shows out there that have Kiss DNA in them because they really weren’t shows of any magnitude before us.” 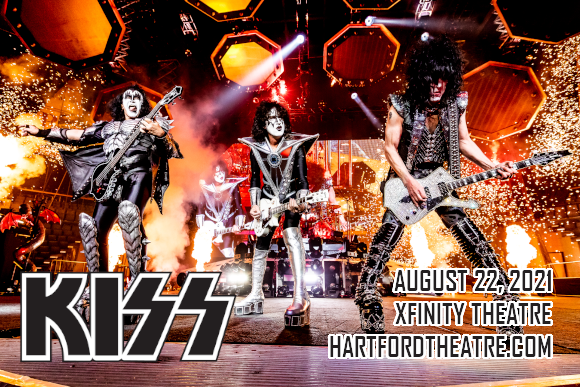 Instantly recognisable by their outlandish signature stage makeup, American rock band Kiss is one of the world's best-selling bands. The group was formed by Paul Stanley, Gene Simmons, Peter Criss, and Ace Frehley in New York City in 1973, and had its breakthrough in 1975 with the album Alive!. After a lineu-up change, Kiss performed throughout the 1980s without their makeup for a period, and found new fans with the MTV generation. They returned to their classic look in 1996 during yet another resurgence in popularity when the band's original line-up returned. Throughout their career, Kiss have earned 30 gold and 14 platinum albums, including three that have multi-platinum certification. The band was inducted into the Hollywood Walk of Fame in 1999 and the Rock and Roll Hall of Fame in 2014.