Are you excited to see the biggest duo in country?!? That’s right, Florida Georgia Line are hitting the road once again in 2019, and they’re taking Dan and Shay and Morgan Wallen along with them for the ride!! They’re coming to Hartford’s Xfinity Theatre on Friday 19th July 2019 – do NOT miss it!! Book now for your chance to be in that crowd – tickets expected to sell out FAST!! 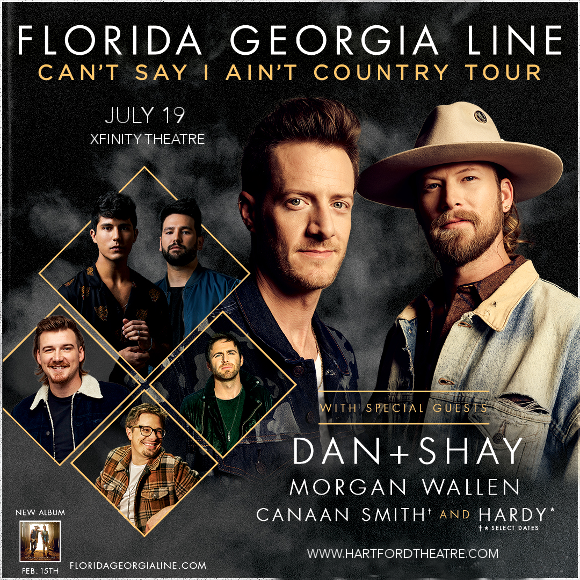 Formed of vocalists Tyler Hubbard and Brian Kelley, Florida Georgia Line emerged on the country scene in 2010 and immediately took that world by storm with their energetic music, celebrating the simple things in life with the incorporation of other genres in a style that has come to be known as “bro-country”. The upcoming album, “Can’t Say I Ain’t Country,” is the duo’s fourth.

"We've been working on that album for over a year now, so BK and I are definitely ready,” Tyler Hubbard said in an interview. ”A lot of the music is just kind of a throwback — an FGL take on kind of what we grew up on, '90s country. It's a well-rounded album. We got stuff we wrote and recorded just for the live show. We got some collaborations with Jason Derulo, Jason Aldean. So, there's a little bit of everything.”
Are you excited to hear all the new songs live?? Get your tickets NOW and be there on Friday 19th July!!