20 years ago, Disturbed dominated every metal club, radio station and TV channel with their smash hit "Down With The Sickness!" Celebrating two decades since the lauch of The Sickness – the album that brought the band worldwide noteriety – they're headed to Xfinity Theatre on Sunday 2nd August 2020 as part of The Sickness 20th Anniversary Tour! They'll be performing tracks from the five-times platinum album, plus songs from their most recent offering, 2018's Evolution, and they'll be joined in support by another band that was huge at the time, Staind, as well as metal supergroup Bad Wolves! 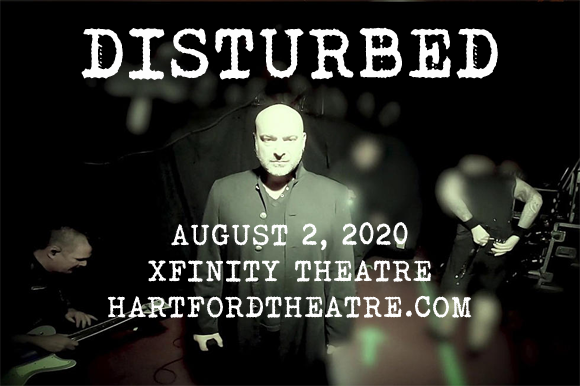 Originally formed in Chicago, Illinois in 1994 under the name Brawl, metal band Disturbed had its breakthrough in 2000 with a new frontman, David Draiman (initial frontman Erich Awalt left the group in 1996), when it released its debut album The Sickness. From then on, Disturbed became a huge voice of the 2000s metal scene, releasing five consecutive Billboard 200 number one albums in a row from 2002-2015: Believe (2002), Ten Thousand Fists (2005), Indestructible (2008), Asylum (2010), and Immortalized (2015). Preceded by the singles "Are You Ready" (number one on the Billboard Mainstream Rock chart) and "A Reason to Fight", the band released its seventh and most recent studio album, Evolution, in 2018.