Multi-platinum-selling Grammy Award-winner and R&B superstar Chris Brown comes to Xfinity Theatre on Saturday 21st July 2018 on his Heartbreak on a Full Moon Tour! Promoting his fresh new record of the same name, Brown will be performing his brand new material for fans, and with a 40 track double album, there's plenty to choose from! Not to mention Brown's unbelievable energy and signature dance moves on stage – don't miss this incredible performer live! 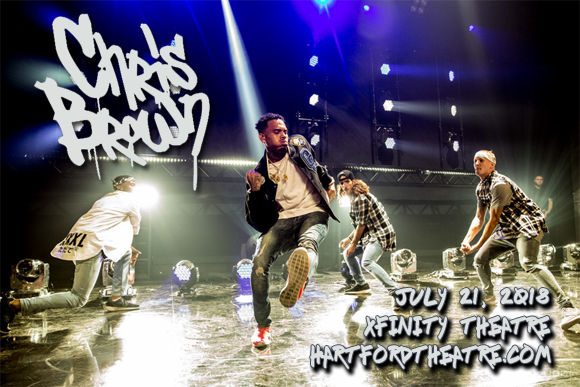 R&B singer Chris Brown began his music career in 2004 when he signed to Jive Records, releasing his self-titled debut album with the label the following year. The album was a commercial success, peaking at number two on the US Billboard 200 and selling over three million copies worldwide, earning double platinum certification from the Recording Industry Association of America (RIAA). The album's lead single, Run It!, was also a success and debuted at number one on the Billboard Hot 100, making Brown the first male solo artist to do so in over a decade. Several number one singles and multi-platinum-selling albums followed, including Brown's fourth album, F.A.M.E. (2011), which became his first to top the Billboard 200 and earned Brown his first Grammy Award for Best R&B Album at the 54th Grammy Awards. One of the world's best-selling music artists, Brown has sold more than 100 million albums and singles worldwide.