Take a break from the conundrum of mundane sounds. Get a burst of exhilarating music that will rock you to the core. Make way for a formidable rock bill for the summer, as Breaking Benjamin & Bush at Xfinity Theatre on Sunday 26th July 2020. Joining them on are Theory of a Deadman, Saint Asonia and Cory Marks. Benjamin broke into the music scene in the early 2000s. Their far-stretching career has kept them glued to their position as one of the most influential rock bands to date. The moment the band broke out news of their tour schedule, social media news feeds have been busy. Mark this date and pin the location. Break no bones in getting tickets because all you have to do is click on that 'get tickets' link on this site. Click and book now before they're gone, gone, gone… 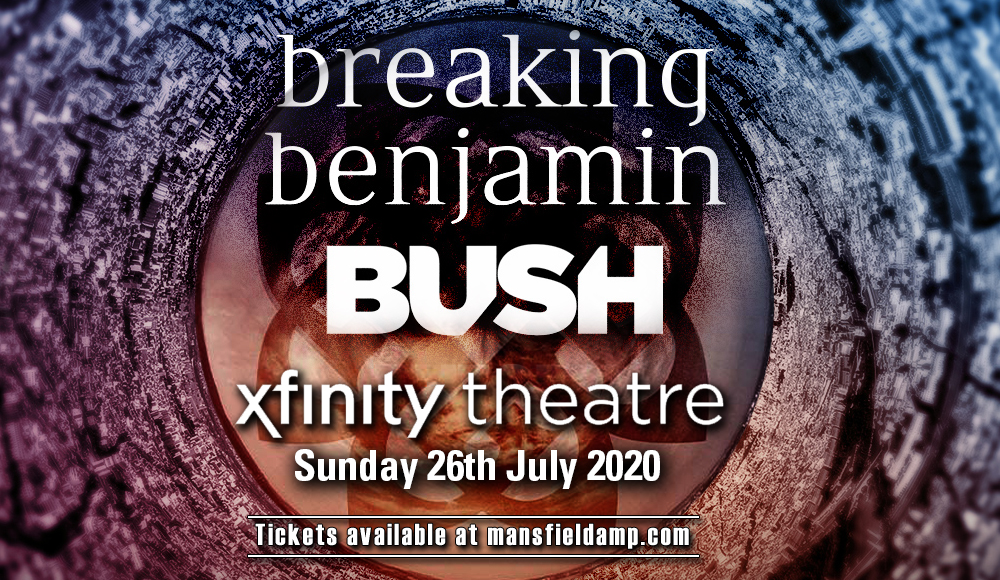 Breaking Benjamin has gotten busy as of late, and you see no signs of them slowing down. After wrapping up last year's tour with Korn and supporting their most recent album "Aurora", which features reworked acoustic versions of their hits along with one original new song. they're on their feet again, raring to seize the live stage, this time, with multi-platinum heavyweights namely, guest opener Bush and supporting acts Theory of a Deadman, Saint Asonia and Cory Marks.

Breaking Benjamin broke out into the scene in 1988. They released their debut album "Asurate" in 2002 and managed to take a slot in Billboards' 200 charts. That same year, the band was on board as a supporting act for Godsmack's massive tour. Creative differences and the rigors of commercial success may have taken a to on the band. In 2010, they decided to take a well-deserved break. Their state of hiatus extended until 2014. With numerous line-up changes, perhaps the band needed this fresh start. With Breaking Benjamin reboot, fans are unanimous in saying that the current line-up is the best as of yet. urrent members include Benjamin Burnley on guitar and lead vocals, Shaun Foist as the drummer, Keith Wallen on guitar and backing vocals, Jasen Rauch as the lead guitarist, and Aaron Bruch on bass and backing vocals.

The band has released six studio albums to date and are known for the hits "The Diary of Jane", "Breathe", "Sooner or Later", "So Cold" and many more. With a record of 7 million albums sold in the US alone, Breaking Benjamin holds three RIAA-certified platinum records, two gold records, and several certified singles, including two multi-platinum, two platinum, and five golds.

Breaking Benjamin is unbreakable. If you want to catch them live, be quick on your feet, rather, your clicks to book those tickets now!