It may not be the tour anyone expected, but it’s now the hottest tour that everyone wants tickets to; Blink-182 and Lil Wayne are teaming up this year for a massive co-headlining tour that will take them around the US to the Xfinity Theatre on Saturday 29th June 2019!! With opener Neck Deep, this is not a show that any fan is going to want to miss – get your tickets quickly while you still have the opportunity! 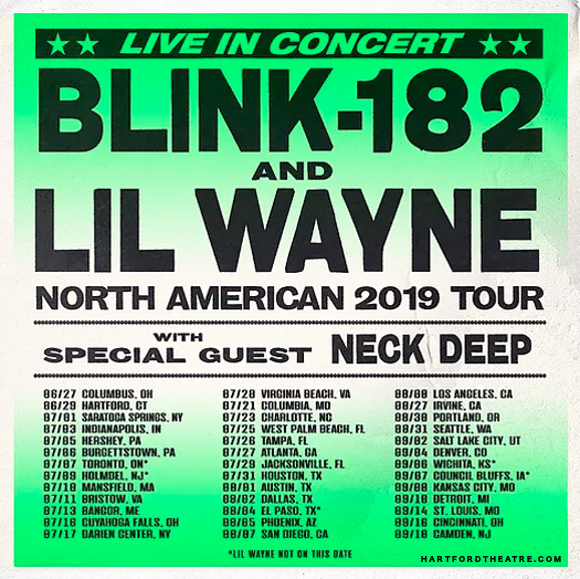 Blink-182 are about to drop their first album of new music since 2016’s “California”. They’ve teased the sound of the upcoming album with the energetic new single “Blame It On My Youth,” with the new album, name as yet unknown, scheduled for release before the tour begins.

As for Lil Wayne, he just released his latest album, “Tha Carter V,” last year. “The long-delayed album captures Wayne how we want to remember him: openhearted, word-drunk, and exhilarated by the possibilities of his own versatility”, wrote Pitchfork, going on add that, "the most surprising takeaway from Tha Carter V, it turns out, isn't that Wayne still has music this vital in him. It's that after all these years, there's still more to learn about him.” Turns out, there’s even more yet; Lil Wayne has confirmed a follow-up album just ahead of the tour.

It’s all very exciting – are you going to be there to experience it all live?? There’s only one way to be sure – get your tickets today!!